Revenge on a Taxi Driver 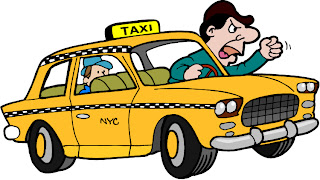 Two years later the man comes back and goes to the same casino. This time he wins money. As he exits the casino, he sees a long line of Taxi drivers.. and at the end is his enemy from two years ago.

The man asks: "how much for a ride to the airport?" Not reconising him the driver replies: "$5" "Okay." says the man and he gets in. Then as he passes the line of other taxis, he sticks his hands out the window and gives them all a big thumbs up.